The Cyber Kill Chain is considered a benchmark for cyberintrusion detection. It is functionally analogous to the Terrorism Kill Chain in all but one respect.1

Intrusions are now a much broader problem class than they were when the Cyber Kill Chain was developed. However, if hackers tend to use trend-focused approaches, then  that functional gap closes considerably with the application of strategic-level counterterrorism (CT) techniques.

Current intrusion detection techniques focus on system vulnerability, and therefore determine immediate threats and not strategic patterns. The cyberthreat environment requires strategic-level analysis of the broader threat, including emerging tactics, techniques, and procedures (TTPs). For strategic-level data collection, vulnerability-focused systems – such as those which focus on injection vulnerabilities or simple security misconfiguration – are insufficient on their own.

Modeling the threat ecosystem strategically through the lens of counterterrorism techniques will enable earlier detection of anomalous behavior. In order to get ahead of the threat, cybersecurity firms must integrate counterterrorism-trained personnel.

Campaign analysis in cybersecurity is identical in scope and practice to strategic-level counterterrorism analysis. Because the Cyber and Terrorism Kill Chains are  essentially analogous, information gained from cyber campaign analysis will be behaviorally equivalent in the Terrorism intelligence cycle.  In both cases, broad-scope analysis over time will identify aggregate patterns and reveal overlapping indicators, identifying and eventually predicting emerging and evolving threats. This creates a viable argument for the inclusion of counterterrorism-trained intelligence personnel in strategic intrusion analysis (SIA) teams.

Given enough aggregate attack data, it would be possible to apply game theory toward persistent cyberattackers, forcing them to change specific and predetermined vectors at points of their attack cycle on subsequent intrusion attempts, which we can then detect or mitigate progressively earlier. The functional gap here is that  cyber-attacks evolve faster and in larger leaps than terrorism methods. But if the data is out there, and is collectable, then applying strategic counterterrorism tradecraft can have a profound effect on the cyberthreat ecosystem.

Intelligence drives operations, and cybersecurity operations must be geared toward collecting attack data in addition to stopping attacks.

The purpose of a military intelligence analyst is not to find answers, but to determine further questions. As intelligence gaps are filled, analysts determine new gaps, and the process begins anew. This “peeling of an onion” can be a difficult concept for civilian 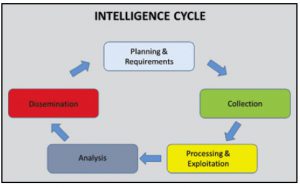 analysts to grasp, particularly “business intelligence analysts” whose jobs revolve around quantifiable and incontestable data. It is likely even harder for many executive-level consumers to appreciate, and may create a point of contention. However, gap analysis drives the counterterrorism intelligence cycle, and it must do so in a Strategic Intrusion Analysis (SIA) cell.  The SIA cell should function in the same manner as an intelligence cell, with the resolution of intelligence gaps as the fundamental mechanic that drives SIA and cyber operations.

By understanding the aggressor’s kill chain, particulary in reference to an APT, the defender can not only thwart the current attack but also detect future attacks earlier and build resiliency into the defensive posture. This is the purpose of intelligence in counterterrorism, and it is directly analogous to APT. This is also why the Cyber Kill Chain model is not necessarily intrusion-centric; it functions just as well with data from unsuccessful intrusions.

These practices are all readily applicable to cyberintrusion data.

IT Professionals Are Not Counterterrorism Experts.

The U.S. military is currently turning out thousands of counterterrorism-trained personnel each year who can be cross-trained in IT methodologies, whether through certifications or on the job. The U.S. military also has mandatory annual training in network defense and cybersecurity best practices for all service members. Experienced intelligence personnel in the IT sector can dissect the threat at the strategic level by analyzing data gained from multiple intrusion kill chains over time, both successful and unsuccessful.

Strategic analysis allows us to understand an adversary’s capabilities, intent, and operational patterns. With the right team, it should be possible to develop holistic, integral network resilience by using what attackers consider their strength – their persistence – against them. Strategic-level APT analysis will also enable broad-scope counterintrusion campaigns.3 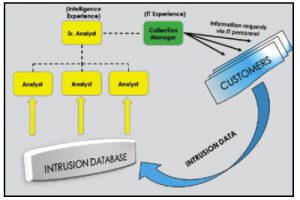 Predictive analytics and Big Data play a huge role in managing networks and resources. However, “analytics” is no more than another word for “monitoring.” Security information and event management (SIEM) systems correlate log events from security and networking devices, reducing the security burden and providing insight and attack data that would be critical to a Strategic Intrusion Analysis Cell. But no matter how advanced, analytics on their own do not protect data.4

There are no magic solutions to network security issues. Strategic intelligence tradecraft does not develop a turnkey product to secure a customer’s data. A Strategic Intrusion Analysis Cell, while not working at the immediate level to stop cyber-attacks, will augment the existing infrastructure of larger IT security firms. A Strategic Intrusion Analysis Cell can alleviate customer concerns and show that your firm is serious about getting ahead of cyber-attackers.

Discussions of APT mitigation and strategic intrusion analysis (SIA) often lack integration of trained intelligence personnel. This is likely due to a lack of formal intelligence training in the IT sector.

Integrating couterterrorism intelligence techniques into strategic intrusion analysis, and hiring intelligence-trained personnel for APT kill-chain strategic intrusion analysis teams, grants a unique opportunity for professional collaboration between military and IT experts. While establishing a Strategic Intrusion Analysis Cell may not provide a direct financial return, the demonstrated dedication to providing the next level of cyber-resilience can establish participating IT security partners as first-tier options for cybersecurity.